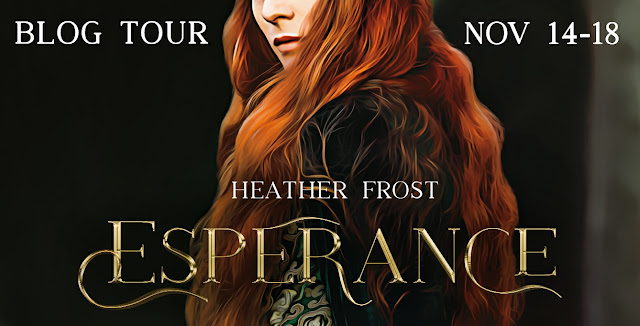 Amryn has many reasons to hate the empire. Her latest is her forced marriage to General Carver Vincetti, better known as the Butcher. If he learns even one of her secrets, he will kill her. And Amryn has many secrets. Not only is she an empath with forbidden magic, she's also a newly recruited rebel intent on destroying the empire—starting at Esperance.
Carver knows the rebels have infiltrated the remote temple of Esperance. His job is to hunt them down before they can wreck the emperor’s new peace. Despite the demons that haunt him, Carver is intent on his mission—but he’s not prepared for Amryn. From her fiery red hair to her surprising wit, his new wife has captured his attention. The attraction that flares between them is undeniable. Now he just has to determine if she’s the enemy.
When the newly married couples become targets in a violent game, Esperance becomes more dangerous than anyone anticipated. Carver and Amryn are about to discover that no one is exactly who they appear to be—especially each other.

Hello Amryn! Would you like to introduce yourself? Maybe tell us a little about your childhood?
Hello, I’m Amryn Lukis. I’m twenty years old, and I’m from the kingdom of Ferradin. My uncle Rix became my guardian when I was a little girl, and I came to live at the castle with him. He’s the chief advisor and best friend to the king, so both men played a role in raising me. I’m quiet and reserved—especially around people I don’t know. Some in Ferradin’s court consider me to be odd, or even reclusive. But I try not to care about what others think of me.
What is something you’ve never told anyone?
I have quite a few secrets, but the one that I protect most zealously is that I’m an empath. The empire outlawed empathic magic a long time ago, so I live in fear that someone will discover my secret and I’ll be executed.
Do you have any hobbies?
I play the cello, and I enjoy reading.
Do you have a favorite color?
Probably dark blue.
What is something that stresses you out, and how do you deal with it?
I don’t like crowds. At all. As an empath, people can be very stressful to be around; I feel everything they’re feeling, and it can be overwhelming. Playing the cello helps to calm me. Sometimes I just imagine playing the notes of a familiar song, and that can help keep me grounded.
Who do you go to when you need advice?
My uncle. He’s always been there for me, and his insights are invaluable. I’m so lucky to have him.
Do you have a favorite childhood memory?
I’m having trouble thinking of one specific memory. But when I was little, before my mother died, she would lie in bed beside me and tell me stories about the fairy world as I drifted to sleep. I was so young I don’t remember most of the stories, but sometimes, late at night, I think I can almost hear her voice.
When you were young, did you ever daydream about the man you might marry?
When I was really young, I imagined marrying someone kind. Someone who would love me completely and keep me safe. Then I grew up, and I’ve learned that people can’t be trusted, and even those you love the most can turn against you. If not for the emperor’s edict, I wouldn’t marry at all. Now, I’m coming to Esperance to marry a stranger, and I honestly don’t know if I’m going to survive this.
If you could make one change in the empire, what would it be?
I wish the empire didn’t exist at all. But if it had to remain and I could make one change . . . I would make sure no empath was ever hunted or killed again, just for being who they are.
If you had to describe yourself in three words, what would they be?
Observant. Compassionate. Careful.
How far are you willing to go to protect the ones you love?
Whatever it takes, I will do it or sacrifice it.
What do you think is going to happen in Esperance?
Twelve strangers with deep prejudices, forced into blind marriages, and living in an isolated temple for a year . . . what could go wrong? To be honest, I hope things go wrong—for the empire. One of the only things holding me together right now is the fact that I’m a new recruit in the Rising, a rebellion intent on tearing down the Craethen Empire. I know it’s going to be dangerous, but I’m ready to help destroy the empire that has taken so much from me.