Abducted during a devastating ambush, Clare is now the captive of ruthless mercenaries. Dragged through the wilderness while grieving heart-rending loss, she must maintain the illusion that she is the princess. Because if she lets the mask slip, even for a moment, the Mortisians will have no reason to keep her alive.

After arresting traitors close to the crown, Desfan fights to rebuild his court, knowing that the imminent arrival of the Devendran princess will further upset the precarious balance in Mortise. But Desfan’s world is rocked when he discovers a rumor that rewrites the most devastating event in his life. He will stop at nothing to find the truth–no matter where it leads.

As Grayson struggles to find his footing in Mortise, he discovers new friends and enemies. His life is further complicated by the tenuous alliance with his spymaster brother. With secrets deepening around him, Grayson must decide where his loyalties truly lie. Through it all, his heart remains in Ryden with Mia. Unfortunately, his love for her is no secret, and the Black Hand is a coveted weapon . . .

Eyrinthia holds its breath as allies and enemies collide. Secrets. Lies. Betrayals. Nothing will be the same.

What was your first day on board the Phoenix like?

Honestly, it was terrible. I was in a very dark place even before getting on that ship; a fifteen-year-old boy who felt ready to explode out of my own skin. I was furious with my father for banishing me onto the Phoenix for a year, and furious with Karim for knocking me unconscious during our first meeting. I wanted nothing to do with Captain Seveh or the rest of the crew. I can still remember waking up on the ship. How trapped I felt. How horrible it was, knowing my father didn’t want me. And having Karim as my constant shadow was fates-blasted annoying. So were all the chores. But that time on the Phoenix changed the whole course of my life, and I’ll always be grateful for that.

Back then, I would have described him as:
- Insufferable
- Thick-skulled
- Sanctimonious

Now, I would describe him as:
- Loyal
- Resilient
- Fearless

How would Karim describe you?

That would depend on the day, and how badly I’ve irritated him. I think it would probably go something like this:
"Desfan is a well-meaning idiot who tries his best to do the right thing, but often fails. He is generally too optimistic, but he will fight fiercely for what he believes in."

What was the best event of your childhood?

Before the shipwreck that ended everything, my childhood was perfect. That makes it hard to pick just one event as the best. But when I look back on those early years of my life, when my family was whole, I just miss the little things. Sneaking into my parents’ room to wake them up. (We just thought the guards got distracted easily—I didn’t realize until much later that they looked away on purpose.) Family picnics on the beach, and swimming in the ocean. Playing with my little sisters. Those were perfect moments that I’ll always treasure.

What’s the worst thing you have ever done?

That’s a difficult question. Fates . . . At the moment, I would probably have to say that the worst thing I’ve ever done is lash out at my father. I’ve done and said some horrible things over the years, all designed to infuriate or hurt him. I know I was younger then, but . . . I’ll carry those memories forever. With him so sick and unable to hear me right now, I haven’t been able to truly apologize, and that haunts me.

What was your first reaction to your betrothal to Serene?

I was surprised. Mortise and Devendra haven’t really gotten along in decades. Though we’ve avoided all-out war, there have been many skirmishes along the border. But a marriage alliance makes a lot of political sense, and I can see why my father worked to arrange this match. I may have some personal anxieties about marrying a stranger, but as the serjah, my desires are irrelevant.

Who is your favourite Royal from all the Kingdoms? Why?

I feel like I should say Serene, since we’re all but promised to marry. (Is she going to read this? Now I’m nervous . . .) That aside, I think she’s a renowned diplomat. I haven’t actually met her, of course, but I’ve heard that her people genuinely like her, and that she has involved herself in many different charitable projects. I think that’s very noble. And perhaps intimidating.

What keeps you awake at night?

Fates, so many things . . . Currently, worry for my country. Mortise has endured many blows recently, and knowing that I’m the one tasked with holding everything together is a lot to handle.

What are you reluctant to tell people?

How inadequate I feel most of the time. I’ve spent so many years running from responsibility. Now that I’m trying to step up, I can feel everyone watching me, waiting for me to fail. What they don’t know is that I’m worried about the same thing.

How would you react if you were catcalled?

Hmm, that’s a unique phrase. But I think I understand your meaning. To be perfectly honest, if a woman made some call toward me, I’d probably just wink. *Grins*

If you enjoyed meeting Desfan, click here for the Blog Tour Schedule that has links to more interviews with your favourite Eyrinthians, and reviews about Royal Captive.

If you are new to Eyrinthia, grab book 1 - Royal Decoy for Free on Kindle during the virtual tour. The series is also available on Kindle Unlimited. 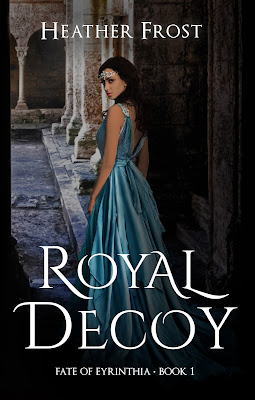 Pre-order Fate of Eyrinthia, Book 3 - Royal Captive in any format, and receive an exclusive short story: The Captain And The Troublemakers. 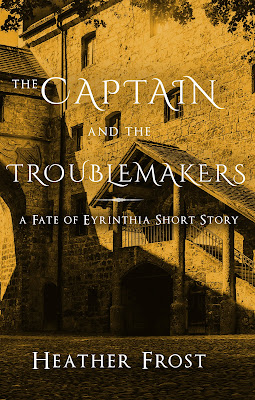 When Wilf steps in for Bennick’s father during an important rite of passage at the military academy, he gets more than he bargained for. Eleven-year-old Bennick has a fight to pick with another student—a boy named Venn Grannard . . .
The story will be emailed to you after Royal Captive releases on 18 March 2022. Fill out the linked form to get your exclusive story.

Thank you for pre-ordering!